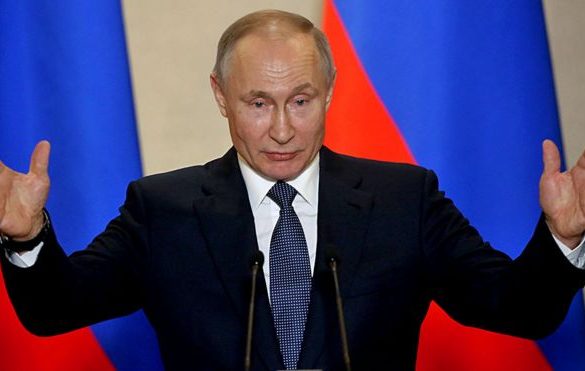 UK government “badly underestimated” the Russian threat and the response it required, according to an inquiry.

The Intelligence and Security Committee’s long-awaited report into Russian activity in the UK said the government was “playing catch-up” and needed to take “immediate action”.

The report also claimed the government made no effort to investigate Russian interference in the EU referendum.

No 10 said the government was “fully aware of the significant and enduring threat” Russia posed.

The ISC’s inquiry covers a number of topics, including disinformation campaigns, cyber tactics and Russian expatriates in the UK.

Much of the “highly sensitive” detail was not published due to fears Russia could use the evidence to threaten the UK.

The committee said Russian influence in the UK was now “the new normal”, and the UK was a “top Western intelligence target” for the state, only behind Nato and US.

ISC member, Stewart Hosie, told reporters the government “took its eye off the ball, because of its focus on counterterrorism”, adding: “The government had badly underestimated the response required to the Russian threat, and is still playing catch up.”

In its report, the group said UK was “clearly a target” for disinformation campaigns around its elections, but that the issue was described as a “hot potato”, with no one organisation taking a lead to tackle it.

The report criticised intelligence agencies for not taking action during the EU referendum, despite there being “credible open source commentary” suggesting “influence campaigns” from the Russians during the Scottish independence referendum in 2014.

And it said the government only “belatedly realised the level of threat which Russia could pose” after the so-called “hack and leak” operation against the Democrats in the 2016 US election, calling it a “game changer”.

The committee said: “Had the relevant parts of the intelligence community conducted a similar threat assessment prior to the [EU] referendum, it is inconceivable that they would not have reached the same conclusion as to Russian intent, which might then have led them to take action to protect the process.”

The report also said that social media companies “hold the key and yet are failing to play their part”, adding that the government should “name and shame those which fail to act.”

Mr Hosie also said no-one in Government wanted to touch the issue of Russian interference when it came to elections with a “10-foot pole”.

He told reporters: “The report reveals that no one in government knew if Russia interfered in or sought to influence the referendum, because they did not want to know.

“The UK government have actively avoided looking for evidence that Russia interfere.”

Foreign Secretary Dominic Raab later told a press conference the government ‘categorically rejected’ the claim, saying it was “the comment of one MP” on the committee.

The government also rejected the committee’s call for a full assessment by intelligence agencies of potential Russian meddling in the 2016 referendum, saying it had “seen no evidence of successful interference”

This report may not be what some expected, but it is still damning.

Many expected the committee to have answered the question of whether there was interference in political events like Brexit.

Instead, it says the problem was the government and the spy agencies failed to even look at this question.

British intelligence has, at least in recent years, been reluctant to get involved in anything that looks “political” and treated the issue of trying to protect democracy like a “hot potato”.

But ultimately it’s the government that the committee blames.

More broadly, there are serious questions about the failure of the UK to confront the spread of Russian money and influence over a long period.

And there is an urgent call for new legislation to deal with an ongoing challenge.

The report also accused successive governments of welcoming Russian oligarchs “with open arms” due to the investments they brought with them.

The committee said “few questions if any were asked about the provenance of this considerable wealth”, with particular issues around the UK’s investment visa scheme, the housing market, the judicial system and PR firms.

They said: “A lot of Russians with very close links to Putin who are well integrated into the UK business and social scene, are accepted because of their wealth.”

The report said it had concerns about links between these wealthy Russians and the House of Lords.

“It is notable that a number of members of the House of Lords have business interests linked to Russia, or work directly for major Russian companies linked to the Russian state,” it read.

“These relationships should be carefully scrutinised, given the potential for the Russian state to exploit them.”

A big collective shrug from Russia

The reaction to the ISC’s report from Russia has been a big collective shrug.

The Russian foreign minister dismissed it out of hand and called it “Russophobia”.

And a Kremlin spokesman said Russia doesn’t meddle in other countries elections.

What this report has done is to present a broad picture of Russia as a powerful foe.

And I don’t think in the Kremlin they will be too unhappy at that.

‘No reason for delay’

Committee members also criticised No 10 for the delay in the report’s publication – seven months after it was submitted to No 10 to sign off.

Downing Street was accused of holding back the report ahead of December’s UK election and for delaying its nominations to set up the new committee – both claims it has denied.

But speaking at a press conference to launch the report, one of the ISC’s committee members, Kevan Jones, criticised Boris Johnson for not signing it off sooner, saying there was “no reason for delay”.

Foreign Secretary Dominic Raab tweeted: “We’ve been clear that Russia must desist from its attacks on the UK and our allies.

“We will be resolute in defending our country, our democracy and our values from such Hostile State.”

The ISC’s former chair, Dominic Grieve – who pushed for the report to be published before the election – told BBC News his pleasure at seeing it come to light was “mitigated by a sense of frustration and bluntly anger at the way the government behaved”.

She added: “The government has underestimated the response required to Russia and it is imperative we learn the lessons from the mistakes that have been made.”