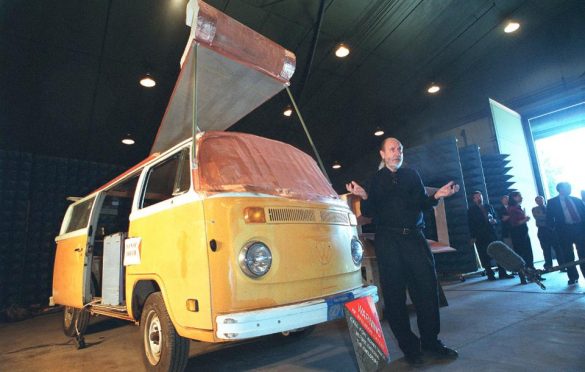 A tank commander on the front line radios in a report during an international crisis…and there is no response. Has a stealthy electromagnetic pulse (EMP) attack destroyed the radio electronics in the opening a shot of a new war? Has it hit just the platoon, or the whole division? Or is the problem just a broken radio antenna?

EMP is the perfect sneak attack. The invisible, silent radio pulse is only apparent when electronics stops working. At present there is no way of telling when an EMP attack has occurred, or what it has affected, so the Pentagon’s Defense Threat Reduction Agency is working on sensors to detect and analyze EMP sensors under its Conventional Nuclear Integration/Battlefield Nuclear Warfare program.

Electrical engineer David Schriner built an EMP weapon which fits into a VW camper van. May 1, 2001 at the Aberdeen Testing Facility in Maryland. The weapon, which uses commonly available materials, simulates a electromagnetic pulse similar to that of a nuclear weapon, which disables electrical and communictaions devices such as cell phones, computers, radios and medical monitors. The US government funded the project to determine whether the technology poses a significant terrorist threat to the country. (Photo by Greg Whitesell/Liaison) GETTY IMAGES

Military analysts have long warned about the threat of electromagnetic pulse, a blast of radio waves burning out electronics devices. The most extreme version is nuclear EMP from a high-altitude explosion, which might disable power systems across the continental U.S. in a ‘Pearl Harbor’ surprise attack. Tactical EMP warheads (‘E-bombs’) are more likely, conventional weapons which can knock out electronics in an area hundreds of meters across, like the fictional one in Ocean’s 11. Beam weapons to hit individual targets are also on the way; last week Russia announced the successful test of an EMP cannon which can disable aircraft and ground vehicles at ranges up to six miles.

China has also been working on EMP weapons to counter American superiority in aircraft carriers and other high-tech weapons. Defenders need a way to sense such attacks, determine their likely effects and where they are coming from.

“The modern battlefield is heavily dependent on electronic systems and near real-time data,” says Tom Cartledge of the DTRA’s Nuclear Detection Division. “Warfighters would benefit by being able to rapidly assess why these essential systems are not functioning properly so that appropriate troubleshooting or alternate procedures can be initiated.”

Central to this, says Cartledge, is knowing where equipment has been affected by EMP or if the fault lies elsewhere. There are already devices out there to detect other types of EMP, for example the bursts of radio waves from a nearby lightning flash. This type of sensor could be adapted but the military demands are more complex and will not be met by a single device.

“Our initial assessment is that we’ll likely need a family of sensors to fully inform the battlefield,” says Cartledge. “This would include sensors for dismounted warfighters, mobile command posts, and fixed facilities. Because of size, weight, power, and data constraints with these different platforms, it is likely these sensors will vary in capability.”

The smallest might be no more than an ‘EMP sticker’ carried by an individual soldier to warn they may have been affected and they need to check their electronic gear. Larger and more sophisticated sensors would give details of the pulse – its duration and intensity – indicating what equipment might have been damaged and how badly. EMP effects can range from temporary glitches easily fixed by rebooting to permanent burn-out and are highly unpredictable. Anything with an antenna which picks up radio waves is likely to be damaged most, but this is not a reliable rule.

New sensors could potentially tell EMP is from a nuclear event, or what type of conventional device was used, which may be an explosively driven EMP bomb or a generator like a high-power radio transmitter.

Simply knowing that EMP attack has taken place is useful, but it would better to know the size and extent. Sensors could also triangulate to get a fix on where the EMP came from. This type of arrangement is easy enough with an array of sensors, but there is a catch.

“These sensors would most likely be networked within larger systems to sharing early warning information and enable collaborative analysis,” says Cartledge. “However, communications is one of the capabilities impacted by an EMP so the sensors must be able to work stand-alone.”

Cartledge says they are still in the early days of assessing the full requirements of EMP sensors, from what the individual soldier needs to how to arrange arrays of fixed installations to warn of EMP damage across the continental U.S. As part of the process, they are looking at what factors, such as lightning strikes, might produce false alarms and how these can be countered.

EMP weapons real, and increasingly likely to be used; terrorists or insurgents may now be able to build them. They will be much in demand on the international arms market by opponents seeking to negate U.S. forces’ technological advantage. Being able to detect such weapons will be increasingly important as they become more common on the battlefield. However, while the U.S. is now looking to harden its power grid against EMP assault, tactical protection is another matter. Detection is just the first and perhaps the easiest step in a new type of warfare across the electromagnetic spectrum.