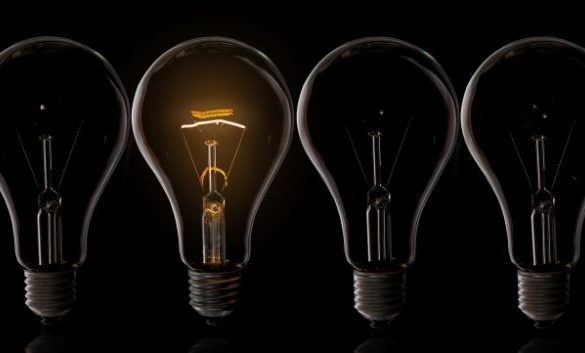 One of the best pieces of magic in the Harry Potter universe is a set of Extendable Ears, which wizards use to listen in on secret conversations behind closed doors. As far as we know, spies can’t (yet) slip replicas of fleshy ears under a doorframe to eavesdrop—but a new light bulb device might be the next best thing.

Scientists at the Ben-Gurion University of the Negev in Israel have discovered it’s possible to recover full conversations from the vibration patterns in a light bulb. The hanging bulb acts as both a diaphragm (sound waves cascade across its surface) and transducer (it converts air pressure from sound to small changes in light), which means it could be a useful gadget for secret agents and nosy people everywhere.

“We show how fluctuations in the air pressure on the surface of the hanging bulb (in response to sound), which cause the bulb to vibrate very slightly (a millidegree vibration), can be exploited by eavesdroppers to recover speech and singing, passively, externally, and in real time,” the researchers write in their new paper, which they plan to present later this year at the Black Hat USA security conference.

Aptly, they call the new attack method “lamphone.” It comes from some of the same minds behind a Tesla Autopilot hack from earlier this year, which proved a simple projector could fool the computer vision system into slowing down or speeding up for fake pedestrians and speed limit signs.

You can get your hands on everything required to pull off the lamphone feat, including a laptop, telescope, microphone, and remote electro-optical sensor—which coverts light into an electrical signal—for under $1,000, the researchers say. Right now, it’s possible to propagate the attack from over 80 feet away, but with improved audio equipment and a better telescope, it could work from even farther distances.

To test their device, the researchers set up shop on a pedestrian bridge about 25 meters away from a third-floor office inside a commercial building. Inside, their target was a simple 12-Watt LED light bulb. Their goal: recover speech and music from the room without ever entering or being able to hear any sounds from the setup point.

They used three different telescopes with various lens diameters—10, 20, and 35 centimeters—and mounted an electro-optical sensor to each telescope lens, one at a time. Through an analog-to-digital converter, the researchers obtained information about the vibrations in the light bulb, and then processed it through a custom algorithm.

The researchers then used the setup to recorded minute changes in the light bulb’s vibration, in response to sounds from a conversation or a song played aloud. That aligned with small changes in the bulb’s brightness at the same time. To make sense of the digital information, the team cleaned up the optical and acoustic measurements and processed them to create an equalizer.

From there, the scientists could recover fuzzy versions of a Donald Trump speech, which Google’s Speech-To-Text API could translate, and “Let It Be,” by the Beatles, which Shazam auto-recognized. In both cases, the audio sounds distorted, as if underwater, but the content is certainly discernible.

While the lamphone attack could enable some new espionage methods, you can also foil it quite easily. Just turn the lights off—so there are no observable changes in light to go along with the acoustic vibrations—and remove the bulbs.

Better yet, just close your blinds. You probably shouldn’t invite spies to look into your windows anyway.