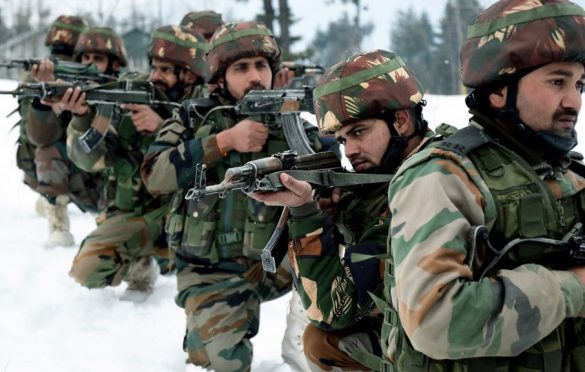 While the Indian Army is bearing the burden of a large personnel driven force, the Chinese are in the midst of a massive modernisation.

New Delhi: With approximately 1.4 million personnel, the Indian Army has become the world’s largest ground force, pulling ahead of China, which cut down its strength by half and is instead focusing on its navy, air force and technology.

According to the Defence of Japan 2019 report, released late last year, China has the third largest ground force in the world following India and North Korea, with approximately 9,80,000 personnel.

The Peoples’ Liberation Army (PLA) was always regarded as the largest army in the world with an approximate strength of two million soldiers.

India, which has been keenly watching the PLA’s modernisation, is just in the initial stages of building a leaner and modern technology-enabled force as envisioned by Prime Minister Narendra Modi in 2015.

However, while China has been working on a massive modernisation of its force, India’s modernisation plans for its large personnel-driven force have been stalled by a cash crunch and a constantly increasing pension.

The Indian Army has so far carried out four transformation studies and is working on trimming its force by about 1.5 lakh personnel, which could take a minimum of five years.

Chinese president Xi Jinping had in 2015 announced the downsizing of the PLA to make the force leaner and reliant on modern warfare.

The unprecedented reform began in November that year during which the focus shifted to technology for cyber and space and futuristic weapons besides giving a greater emphasis on building up the PLA’s Navy and the Air Force.

“Since 1985, China has continuously sought to modernize its military by curtailing the number of personnel and streamlining organizations and systems through reforms, including those currently being implemented, in order to improve operational capabilities … China has rapidly modernized its missile forces in recent years,” the Japanese military document said.

In January 2020, the state-run Xinhua news agency reported that China had cut the size of its land-based PLA by about 50 per cent and significantly boosted its navy and air force as part of an “unprecedented” strategic shift designed to transform its army into a comprehensive modern force.

The report indicated that the four other branches of the PLA — the navy, air force, rocket force and strategic support force, which is responsible for areas such as cyberwarfare — together make up more than half of the Chinese military, overtaking the army, which has traditionally been the dominant unit of the PLA, the South China Morning Post reported.

Shanghai-based military analyst Ni Lexiong was quoted by the newspaper as saying that the overhaul marked a significant strategic shift from having a homeland-based defensive force to one with the capacity to allow Beijing to flex its muscles beyond its national borders and to protect its interests overseas.

“He explained that modern warfare puts a greater emphasis on superiority in areas such as the air, space and cyberspace — further reducing the importance of the ground force,” the report said.

India’s military has been in the process of operationalising cyber and space commands for several years now. It also lags behind in incorporating future weapons while China and other countries such as US and Russia are way ahead.