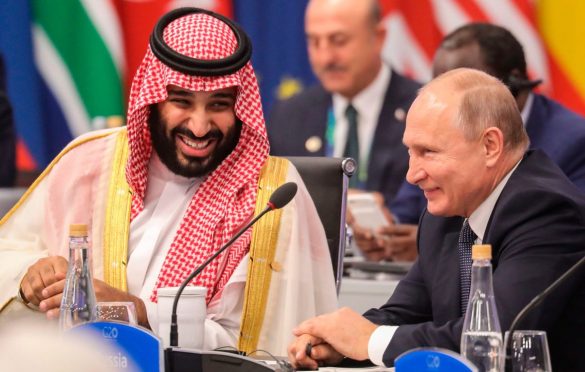 Saudi Arabia has tried shocking rivals into submission before and it hasn’t turned out well.

Crown Prince Mohammed bin Salman, the de facto leader of the kingdom, is gearing up to use the might of Saudi Arabia’s oil production capacity to deliver a crushing blow to rival producers. His aim appears to be to drive oil prices down so far and so fast that Russia realizes it made a terrible mistake in refusing to agree to deepen output cuts at Friday’s OPEC+ gathering, bringing more than three years of supply management to an abrupt and unexpected end.

In Yemen, MBS, as the Crown Prince is known, launched “Operation Decisive Storm” in 2015, using Saudi military power to inflict a devastating attack on Houthi rebels in Yemen. The campaign’s aim was to destroy the rebels and pave the way for the quick restoration of Saudi-backed and internationally recognized head of state, Abd Rabbuh Mansur Hadi.

It didn’t turn out to be quite so decisive. Five years later, the conflict drags on. The Houthis remain in control of a large part of the country and President Hadi is still in exile, while Yemen’s civilian population bears the brunt of the fighting, with three-quarters of the population needing humanitarian aid, according to the United Nations Office for the Coordination of Humanitarian Affairs. Meanwhile, the Houthis have taken the fight to Saudi Arabia, claiming responsibility for last year’s attacks on oil processing plants at Abqaiq and Khurais and the strategic East-West pipeline.

Where managing the world’s oil production capacity is concerned, there were other possible ways to deal with last week’s standoff with Russia.

Back in 2016, the Organization of Petroleum Exporting Countries — which now counts 13 members with the capacity to pump about one-third of the oil the world uses each day — persuaded 10 non-OPEC countries to join them in managing oil supply, creating the larger OPEC+ group. The agreement, initially meant to last for six months, is now well into its fourth year. While OPEC has taken about two-thirds of each output cut agreed, there is absolutely no reason for that ratio to have become permanent.

Indeed, Saudi Arabia could have responded to Russia’s unwillingness to impose deeper output cuts on its oil industry by accepting the country’s offer to extend the current agreement, while moving ahead with a further reduction by OPEC alone. It didn’t. Instead it has launched an oil price war, slashing the official cost of its crude by the most in 30 years and planning to raise output by at least 1 million barrels a day in the coming months.

Will the tactic work?

Oil prices have crashed, but it won’t bring a chastened Russian energy minister back to OPEC’s Vienna headquarters any time soon. Saudi Arabia reserved its biggest price cuts for sales to Northwest Europe, a key market for Russian barrels. That challenge won’t win it any friends among policy makers in Moscow. This is developing into a game of who’ll blink first between two contestants who’ve cut off their eyelids.

Russia has some geographical advantages over Saudi Arabia, with export pipelines that carry its crude directly to refineries in China and Europe, as well as shipping terminals that are just a few days sailing from major refining centers in those regions and in Japan and South Korea. By contrast, vessels sailing from Saudi Arabia can take up to a month to reach either northern Asia or northwest Europe, adding both time and additional cost to its deliveries.

Russia’s walk-out from the OPEC+ meeting was a slap in the face for Saudi Arabia, which has made much of their relationship. I warned last June and again just a couple of weeks ago that the kingdom (and OPEC) would come to rue the alliance with Russia.

Former Saudi oil minister Sheikh Zaki Yamani — who I worked for from 1989 until 2014 — told me that he and several other OPEC ministers were wary of admitting the Soviet Union into the group in its early years, fearing that it would come to dominate the other members. His concern appears to have been well founded.

Saudi Arabia’s aggressive price cuts and preparations for a production surge are its attempt to show Russia that it can’t take for granted the kingdom’s role as swing producer. The risk, though, is that just like the Houthis in Yemen, Russia and other big oil producers absorb the pain and cling on, dragging the kingdom into a long oil price war that neither can afford.

But the kingdom clearly feels it needs to show it’s a force to be reckoned with — no matter the cost.