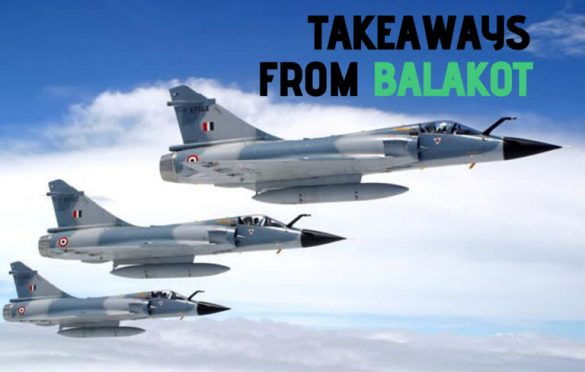 A year after the Indian Air Force carried out an airstrike in Pakistan’s Balakot, Islamabad will now have to seriously weigh the costs that it is willing to incur if it continues to sponsor terrorist attacks in India, which is no longer being seen as defensive on terror and is showing greater willingness to use the military instrument, writes Lt Gen (retd) D S Hooda, who had led the surgical strike in 2016.

New Delhi: On 14 February 2019, a vehicle-borne suicide bomber attacked a Central Reserve Police Force convoy near Pulwama in Kashmir, killing 40 personnel. In response, on 26 February, the Indian Air Force struck at a Jaish-e-Mohammed terrorist camp at Balakot. Balakot is located in the Khyber Pakhtunkhwa province of Pakistan, and this was the first time since 1971 that Indian aircraft had carried out an airstrike on Pakistani soil

The next day, the Pakistani Air Force launched a counter strike that failed to do any ground damage. However, in the aerial battle, a Pakistani F-16 was shot down while the Indians lost a MIG-21 whose pilot was captured after he was forced to eject over Pakistani territory. For the next few hours, it appeared as if the situation was headed for an escalation. Fortunately, both sides desisted from further military action due to international pressure and the early return of the pilot to India.

As is usual in the Indian political scenario, the ruling and opposition parties were soon in an unseemly slugfest over the number of terrorists killed at Balakot. Foreign media also jumped into the debate, and satellite images of Balakot were soon floating all over the internet, some justifying the Indian claims, others questioning it.

One year later, now that the dust has settled, we could perhaps attempt an unbiased view of what the Balakot air strikes achieved and the lessons that it holds for the future.

Read: Keeping the military out of politics will maximize professionalism

In a crisis, the credibility of a country is judged not merely by the size of its military capability, but also by its willingness to use that capability to enforce its will. For too long, India was seen as being very defensive on terrorism, and this encouraged a sense of impunity in the Pakistan deep state to carry on a proxy war in Kashmir. This has now changed with the Indian political leadership showing greater resolve and willingness to use the military instrument. Pakistan will have to seriously weigh the costs that it is willing to incur if it continues to sponsor terrorist attacks in India.

The use of airpower in response to a terrorist attack was also a first. In an interview with The Indian Express, the Air Force Chief Bhadauria said, “The Balakot airstrike redefined the use of airpower towards meeting the national objective and has changed the paradigm of sub-conventional action and response in the subcontinent.” Obviously, every terror attack is not going to lead to an airstrike, but the employment of airpower has significantly increased India’s response options in its attempts to coerce Pakistan.

Will a more aggressive and assertive India, impatient with terror attacks, force a change in Pakistan state’s behaviour? There would undoubtedly be greater introspection within the Pakistani establishment on how far they are willing to put their nation at risk for the sake of Kashmir. There was a similar debate in Pakistan after the Kargil war, and Shahid M. Amin, a former diplomat, wrote in The Dawn, “It is high time that the country became ruthlessly realistic about its limitations and priorities. First and foremost, Pakistan’s survival must precede everything else, including our attachment to the Kashmir cause.”

Read: Incidents along border will reduce if Pak puts a check on infiltration

Notwithstanding any introspection within Pakistan, it appears unlikely that the Pakistan Army will alter its irrational objective of seeking strategic parity with India. In a recent address at the International Institute for Strategic Studies, retired Lieutenant General Khali Kidwai said, “the reality is that it is Pakistan that must shoulder the responsibility of maintaining the vital strategic balance in the conventional and nuclear equation with India as the critical determinant of the state of strategic stability in South Asia.”

Waving the nuclear card, Kidwai further went on to say, “I would like to caution that it would be a serious professional folly on their part to consider that a single airstrike, that too conducted most unprofessionally, would render Pakistan’s robust nuclear deterrence a bluff.”

It is in the different lessons learned by both sides that the chances for miscalculation lie. The Indian military is convinced that there is sufficient space below the nuclear threshold to apply conventional power and that India must use its superior capability to counter terror attacks from Pakistan. On the other hand, the Pakistan military feels that its nuclear threat will deter India from escalating beyond a limited operation, thus neutralizing the conventional asymmetry.

In this uncertain mix, both sides must realistically and rationally assess their options and political objectives. Pakistan should understand that a terror attack against India is the first step in the escalation ladder, and if this is avoided, the second step need not be taken at all.